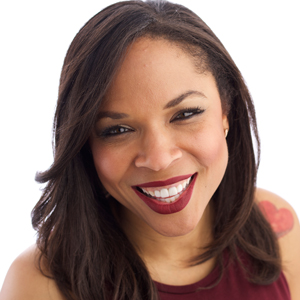 Whether on the air or standing before hundreds at a live event, when Sharon “La Loca” Montero steps before a microphone all bets are off.  The New York based radio personality is a multi-talented force to be reckoned with and currently serves as the Mid-Day host of Radio 103.9, New York’s Best Mix of R&B.

Born in Boston, Massachusetts and bred in Perth Amboy, NJ,  La Loca’s work in radio spans over 10 years with time spent at more than half a dozen radio stations in the Florida Market including Power 95.3, 102 Jamz Orlando, and 95.7 The Beat. La Loca has interviewed everyone from Kanye West and Mary J Blige, to congressmen and reality stars. Her unique flair and diverse range of experiences make for a strong voice in the industry. From working as the Newscaster on WB national Daily Buzz, to serving as the host and face of Red Bull’s Thre3style US Competition, to being a cast member on NBC Escape Routes, La Loca’s perspective is wholly her own.  She is committed to charting a new course in radio and to inspiring others to follow their dreams. She can be reached on Facebook, Twitter, and Instagram (@ItsLaLoca) and at www.itslaloca.com.